We fitted in a lot of decisions and a lot of discussion. Â Please note the many dates for your diary.
We decided:
As if all that was not enough we also managed to fit discussion on the reaction from local candidates to the space for Cycling Campaign (poor, despite our efforts which were selected for special plaudits by the LCC) and an in depth discussion of cycle provisions and culture in the light of the recent presentation at the Dutch embassy.
A final date reminder – ride to the petrified oaks of Mundon deep in the Essex countryside onÂ 24 August.Â
Â
Thanks to everyone for their contributions to a lively meeting.
Arnold

An interesting and lively meeting. Â On the formal side we approved an annual report and accounts. Arnold Ridout Â and Kerena Fussell were elected as joint co-ordinatorsand Bill Bremner re-appointed as Treasurer.
We had wide ranging discussions:

The ride season got off to a good start with over 15 joining in the first Newham Ride. Â Fortunately the weather was excellent and there was improved access to the Olympic Park. Â Having taken a look at the northern section of the Olympic park we moved down the river Lea to Cody Dock where Simon, who runs it, outlined his successes to date in carving out a new riverside community facility and his exciting plans for the future. 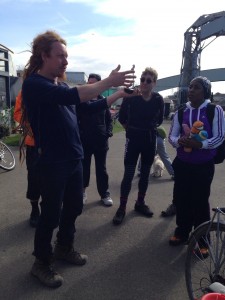 We moved down to the River Thames for a lunch break at Trinity Buoy Wharf. 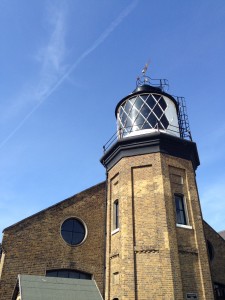 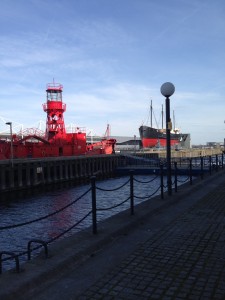 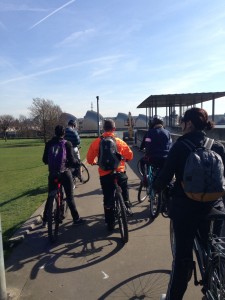 We then wended our way back via Beckton and the Geeway to the View Tube for a wellÂ deserved piece of cake and cup of tea. Â For the majority of the riders there were significant new discoveries and for all of us a pleasant reminder of our interesting borough. 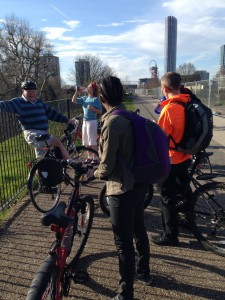 This is a news update to sight everyone on what is current, before the annual meeting on 31 March.

Sadly Newham’s mini-Holland bidÂ was unsuccessful, but there are positives to come out of the exercise, and Councillor Christie has been in touch to outline these. Â In fact there remains a good chance Newham may get most of what it bid for (albeit through different pots of money). Â  For example Stratford gyratory has been listed amongst the junctions for improvement, TfL has committed support for the Leaway (Cody Dock to Canning Town) Â and there is likely to be support for the Greenway improvement and linked quietways. CS2 to Ilford may come from the CS programme.

Disappointingly our request forÂ Upper StÂ to have a 20mph limit was overruled. on the following grounds: Â  “Being a bus route and major road link in the borough it was agreed that it was not appropriate to install speed reducing features on Upper Road to bring the speed limit down to 20mph, and that the objection be overruled” Â It is particularly retrograde to treat Upper St as a major through road, which it should be not and does not have to be; and then to use that as an excuse to allow motor vehicles to use it at a dangerous speed. Â Cyclists and pedestrians have to pay for the police and the Council’s unwillingness to enforce traffic rules.

I have been given a design forÂ Carpenter’s RdÂ for when it is opened as a through route. Â This is a key Olympic Park connection route. Â A 20 mph limit is proposed (it is a bus route and a through route which makes Upper St even less understandable). Â It looks like cyclists are being pushed back onto the carriageway from shared paths in the railway tunnel. Â I have sought further clarification.

TheÂ “No to Sivertown Tunnel”Â have campaign have written to seek support, financial or otherwise.

The first of this year’sÂ Newham RidesÂ had a good turnout this Saturday and excellent weather.

This will take place at 7.00pm at CoffeE7. Â See events page for details.

This is a news update since our last meeting.

Â General news:
Ward asks were discussed. Â They need to be formulated into a headline sentence and a description of not more than 100 words. Â In the light of our discussions these are my first tentative drafts on which comment (or alterantives) would be most welcome (by 21 Feb please to me – see contacts):

In order to complete our “ward asks” for the LCC Space for Cycling Campaign by the end of the month we are bringing forward our monthly meeting to 10 February. Â This will be the main item on the agenda, but Â we can also pick up on Â developments from last month’s busy meeting. Â We will meet in our usual venue CoffeE7 in Forest Gate at 7.00pm.

In the past month

Please bear in mind that this is the exprimnetal site as is the existing content, which is not to be relied upon. All feedback on the layout of the site and what you would like to see covered by it gratefully received.