This was held on 21 May to avoid a bank holiday.  In the evening sunshine we took a quick ride around the rat runs of Manor Park,  between the Romford Road and East Av/Plashet Grove, either side of High Street North, leaving time for discussion in the garden of the Golden Fleece afterwards.

On Manor Park, Adam suggested how through traffic could be stopped by point road closures leaving groups of streets accessible (each group shown as the same colour on this map): 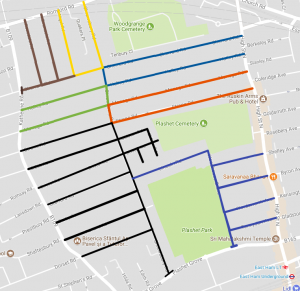 We discussed how to run our Freecycle feeder ride on 28 July.  We are looking at a new route.  Marshals are needed.  If you can help and have not already indicated please let me know on newham.lcc.org.uk  again by 10 June.

We were not impressed with the plans for Q6 Temple Mill Lane/Leyton Rd jucntion and will be renewing our objections.  It is imperative that the quietways reach an decent quality.  otherwise they will waste public money on infrastructure that will not attract cyclists.

We decided to run a programme of Councillor Rides to reinforce with our new Council the potential of and benefits from cycling in Newham.

Out third cycle of bike maintenance and ride with Ambition, Aspire, Achieve goes ahead over teh next two Saturdays.

A lively Annual Meeting, with refreshment, was held at the East Ham Working Mens Club on 30 April 2018.  A turnout of 24 members and guests heard an interesting presentation by Dr Rachel Aldred, an LCC Trustee, on cycle safety.  She has undertaken a study which examined the various factors contributing to cycle safety such s the nature of the roads, the amount of traffic, the presence of bus lanes, speed limits and the number of cyclists.  One of her findings was that safety improved with a 20mph speed limit irrespective whether it was enforced or not.

This finding was complemented by Jeremy Leach from Living Streets London and 20’s Plenty who provided an optimistic view of recent developments including forthcoming speed limiters for buses.

Gerard Bailey, Chairman of Bike from Boleyn, thanked us for our contribution to the successful ride of thee previous day.

In addition to the matters raised in the report (see earlier post):

On the business side the following Officers were elected for 2018-19:

A turnout of over 20 , including 2 Council Officers and two prospective Councillors participated in an interesting meeting:

A good turnout of 16 mustered at the Velodrome on a bitterly cold evening.

We we rewarded with a really interesting presentation and discussion with Michael Barratt,  TfL’s development impact assessment lead, who leads a team using innovative (and co-operative) methods to mitigate the impact from London’s major construction projects, particularly for pedestrians and cyclists.  He has already provided very helpful assistance to us on the Stratford Gyratory Project.

Given the plethora of development in Newham the approach he described should be very beneficial.  This includes liaising with (a) constructors direct and through any “Consider Constructor” type scheme, (b) the Council, and (c) using TfL’s reporting tool,and the draft TfL Traffic Management Handbook.

We agreed run a feeder from Stratford to the Free Cycle on 28 July 2018.  If you are able to help marshal this important event please put the date into your diary.

Steve outlined the ride programme to date and forthcoming events.  Our 2 country lane drides have attracted participants from all over London  Our local leisure rides start this Sunday, weather permitting.

Our partnership with AAA got off to a successful start with a bike checking session followed the next week by a Greenway ride.

We decided to put in a collective response the LB Redbridge’s consultation on its “Ilford Garden Junction” which includes in the plan a two way cycle track on the north side of the Romford Rd linking the existing track to the Tunnel Ave and the Roding Way,  under the North Circular Rd; andthe creation of a “pocket park” .  Please also respond to this very straightforward consultation as individuals supporting the scheme and, in section 3 on cycling adding the comment that the cycle provisions to be included phase 1 – the only phase to be funded so far.

The Channelsea Ramp on the Greenway has been opened and now provides an excellent off road link from the Greenway to Stratford Town Centre. There have however been a number of attacks targeting cyclists o the Greenway.  It is helpful to record personal experiences with the Greenway Users Group.

There was a general discussion on the implications of the recent Councillor selection process by local labour party wards.

17 of us squeezed in our last minute venue – Forest Gate Arts, with an  agenda that was equally  packed and interesting.

Dockless Bike Hire: Fraser from Ofo bikes spoke to us about the company, their bikes and the dockless system, their plans, and their  discussions with Newham Council with a view to introducing them into the borough.  We were even able to try one out! 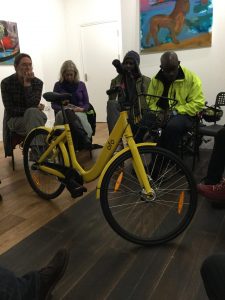 The company is a partner of LCC and ultimately plans 150,000 bikes in London, starting in Islington and Hackney and focusing on surrounding boroughs.  Newham is therefore a natural point of expansion.

Ambition, Aspire, Achieve: we plan to go forward with this partnership by providing bike fixing stalls at the children’s cycle club on 17 February, 28 April and 26 May with short Greenway based rides on the weks following – 24 February, 5 May and 2 June. These are all Saturdays between 10am and 1pm.  If you are able to help (and haven’t already volunteered) please let me know.

Forest Gate to Wanstead Link: This is a new subject.  Given how appalling Centre Rd is, it is difficult to cycle directly to Wanstead from Forest Gate.  We decided to do some preliminary investigation, by a ride of the route; and also to see if there is a group in Redbridge who would be interested in pursuing this with us.

Bike from Boleyn:  Next ride is April 14.  Although this is some way off marshals are needed.  So if you can help put this date in your diary and let me know.

Stratford Gyratory:  an audit of the works was undertaken with Newham Council’s project manager, the Met Police Safety Unit and Michael Barratt, TfL’s Development Impact Assessment Lead, who promotes innovative methods to mitigate the impact of major construction projects.  His subsequent report highlights the various “hotspots” and recommends what can be done to mitigate.  The main action point for us is to lobby the constructors who are taking up disproportionate space in Great Eastern Street (which is separate  to Gyratory project).  We agreed to invite Michael to our next meeting. The audit could usefully be repeated in a few months.

Liveable Neighbourhoods: This is the focus of LCC election campaign.  It involves identifying at least one good project for local groups to push for in the next round of applications for TfL funding.  Newham Council has so far not made any applications.  In preliminary discussions  a number of potential schemes were identified which could be part of a future campaign.  This will need to be picked up as it becomes clearer who the local candidates are likely to be.  Olawale is attending a workshop on the broader campaign for Liveable Neighbourhoods.

Annual meeting:  This will take place on 30 April.

We tried a new venue, the Atherton Leisure Centre.  Once the disappointment of coffee not being available from the cafe was overcome it was deemed a success by our turnout of 11.

We decided to invite TfL, local Councillors and Newham officials on a ride to experience the difficulties for themselves.

A well attended and lively meeting on 25 September.

Our July meeting started with an well attended ride from Forest Gate around the Olympic Park.  We were please to welcome Fran from LCC. More joined us for the business end, which took place at The Neighbourhood in Stratford Village.

The meeting took place a week earlier than usual and in a new venue, the Terrence Brown Arc in Canning Town, currently the centre of the charity Ambition, Aspire, Achieve (AAA).

A rather more select band of attendees than usual, but enough for lively discussion.