Well attended and lively as usual. Â There is still a lot going on – much isÂ positive.

If you would likeÂ further details on any of these items pleaseÂ get in touch through the contact details on this site.

As long ago as 31 July 2103 Councillor Conor Mcauley, then Executive Member for Regeneration,Â  trumpeted in the Newham Recorder “Our vision is for Newham’s streets to be made more accessible for cyclists” and called for more of the Cycle Superhighway type of infrastructure in Newham.Â  He ended “We’ll keep lobbying TfL to do their bit and deliver a cycle hire scheme and a cycling network that will benefit all.”Â  This looked like a change of approach from the Council that had previously blocked Cycle Superhighway 2 through Newham. Completing CS2 to Ilford is one of Newham Cyclists Space for Cycling suggestions to which Councillor Patel of Manor Park signed up.Â  It was included in Newham Council’s mini-Holland bid, but this was unsuccessful.Â  Since then Â we have seenÂ  no sign that Newham Council has pressed for this and it nowÂ appears to be dropped from TfL’s Cycle superhighway programme.

This unsurprising Â outcome is compounded by Newham Council’s approach to the existing CS2. Â It has secured the removal of a key section providing protection forÂ cyclists from being “left hooked” at the junction of Broadway and Tramway Avenue, leaving the current dogs breakfast, which needs a plethora of signs addressed to both drivers and cyclists to be careful. This change was demanded in the face of a safety audit that confirmed that this change made this junction more dangerous for cyclists.Â  The reason? As the Council eventually admitted, this was to accomodate “driver misbehaviour”.

On 17 September 2014 Councillor CorbettÂ  told the Recorder â€œThe Council has made clear to TfL the urgent need to fully address all safety issues at this location and review the design proposals,â€ he said. â€œThis should be done in conjunction with key stakeholders such as the council, police, emergency services and cycling groups.â€

” We will return to install the final, agreed design later this year once the local development works are fully completed, and remain committed to provide safe cycling infrastructure across London.â€

There has been no change to this unction, made more dangerous for cyclists by the actions of Newham Council itself.

On 3 December 2014 Â a spokeswoman for the Council misleadingly told the Recorder that the removal was at the behest of TfL, wrongly said that the Council only closed the risky sliproad (which is still open) and that the changes were done following unspecified “concerns” raised by the police and cyclists. The Council haveÂ  now admittedÂ  that these “concerns”Â  were expressed by three cyclists who happened to randomly stop when Council officials were looking at the junction, but they have still to reveal the nature of these “concerns” despite two freedom of Information requests concerning this junction. Â There is no indication that these cyclists preferred the current situation to the protection provided by the CS2 with its “wands” i.e. the latest version provided by TfL.

At no time were Newham Cyclists consulted despite the latest in a series of claims that ” We value the views of Newhamâ€™s cycling community and are committed to ensuring that there are safe cycling routes in the borough.”

Prior to the Olympics Stratford High Street was being touted as a potential Manhattan style area, with its wide carriageway and tall buildings. Â But of course whereas Newham Council blocked segregated cycle lanes,Â Â New York City has been busy installing segregated cycle lanes and to very beneficial effect:

For a full report and some pictures of what can be done:

Mostly a social meeting with excellent cheeseÂ and beer. Â Nevertheless some business transacted as there is still a lot going on.

In what is turning out to be a Newham Cyclists tradition, the weather was amazingly good. The ride was enjoyable; 25 miles, mostly off road. Â Particularly notable was the Thames in the autumn light – Â as still as a mill pond. Â Below are a couple of phots, taken by Chris. Â The first is the group stopping by the river for a photoshoot and the second on the marsh pathÂ approaching the RSPB. 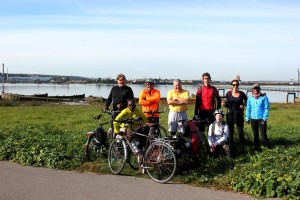 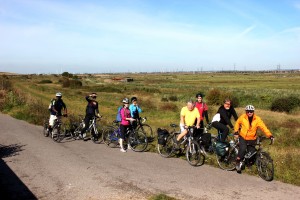 Any LCC members planning on voting in the Board Trustee elections may want to do a bit of additional research into Tony Martin. It has come to our attention that he is an extreme right wing activist (he has confirmed he is @tonyleemartin on Twitter).

A lot to report:

Not surprisingly after all this there was not time to look at the Space for Cycling follow up which we will do at our next meeting onÂ 29 September.
See separate posting for forthcoming rides.
Arnold

The weather respected the tradition of being excellent for ourÂ rides. Â Nine of us sortied to Chelmsford by train and then followed Sustrans national route 1 from there to Maldon and back, with a diversion to Mundon with its 14th Â centruy church and “petrified” oaks. Â Very picturesque and extremently pleasant. Â Thanks to Chris for leading us. Â 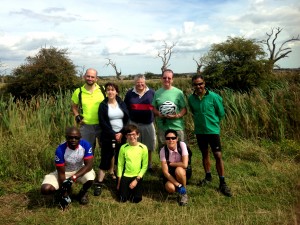 Above: The oaks, but no bikes.

Below: Â A high spot en route, this time with bikes. 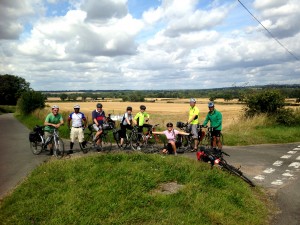 On Tuesday night we had a very pleasant saunter down the canals to a pub in Canary Wharf that turned out to be called the Ledger – and back. Â Some business was transacted as refreshments were taken.
Other news

Some of you may have already done this, but if not – please just take a few minutes to have your say on TFLs plans to make London’s lorries safer for pedestrians and cyclists.