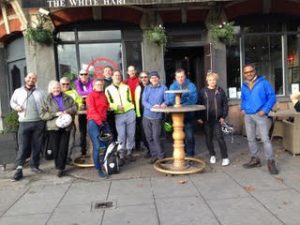 We all knew that this ride would not be dry, despite the weather forecast. The day started cold and cloudy as we met at the Viewtube base camp for the much previewed brewery ride. The idea for this ride came from and article in the London Cyclist magazine a few months before. They had suggested a tour of six taprooms and microbreweries in east London. However our own resident expert, Bill, had discovered that there were approximately 20 breweries in east London, some in pubs, some with taprooms and some without, and we could therefore improve on this small sample. Although it was ambitious to cover all twenty breweries, we decided to limit the stops to three, Howling Hops, I Mile End and Wild Card.

We set off at 12:15 and it was not long before we alighted on the first stop in Hackney Wick. After the first sample we left just as West Ham fans were arriving for the home match against Stoke. We crossed into Victoria Park where we found the first brewpub. Through the park and into Bethnal Green we were tempted to stop at Redchurch with it’s cosy bar, however we were on a schedule and so had to limit our trade to offsales. Down Cambridge Heath Road to 1 Mile End and stop number two. This gorgeous pub is located in Whitechapel, adjacent to the Blind Beggar and the old Watney Manns brewery, and we had a group photo with no bikes and no beer, strange.

Then back to the Bethnal Green Working Mans Club which houses the Three Sods brewery. Continuing north though the back streets to Hackney Central, where we found the Cock brewpub and identified two other breweries nearby. The tour relentlessly tracked north along the Lea towpath to the Beavertown brewery in Tottenham Hale. Despite a rather inauspicious location, on an industrial estate, and the near freezing temperatures the place was packed with people sitting both inside and outside eating and drinking. This beer must be good, they certainly have some excellent artwork. But, we had only one more stop and it wasn’t here, so we pressed on through Waltham Forest to another quite unique little industrial estate with two breweries, a gin house and God’s Own Junkyard, which is difficult to describe and impossible to classify. After supping the Wild Card we returned, utilising the superior mini Holland roads, to Stratford, where we had planned to end the ride at the only Newham brewery taproom, Tap East. However we were late and as we approached the Westfield centre, we could see crowds of WHU fans pouring through the streets around the station on their way home. So we tactically ended the ride on Victory Way

Thanks to Bill for his comprehensive research, more details are on the Newham Cyclists website and also to Robin, whose photos provide and excellent record of this unusual day out.