Throughout the cold spell the dream of the “Come on You Irons” West Ham United themed ride did not fade and die and  we were rewarded by starting off the ride in the usual Newham Cyclists balmy weather conditions.  Things did take a turn for the worse with thicker cloud cover and being too early for the coffee stall at Cody Dock.

Undeterred the band of 11 continued through quiet back streets and off road routes to visit 4 of the five sites where West Ham play(ed) and the site of the Thames Ironworks. 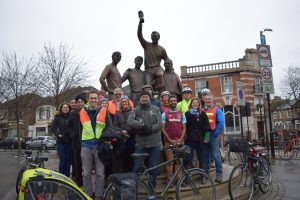 Here was a welcoming party from our partners in Bike from Boleyn, including Bobby Seagull.