Valentineâ€™s day ride around the Hundred of Hoo

With Gravesend only 17 minutes by train from Stratford the Hoo peninsular was a convenient destination. Ten of us, with our bikes, took this train and met two more, Nick and Nigel, at Gravesend station.

The weather was cold but bright with a north easterly breeze providing a slight headwind as we set off towards the medway and the infamous Kingsnorth power station. We were soon out of Gravesend and riding through the bleak and open farmland which makes up much of the peninsular. As we passed Hoo St Werburgh the route provided us with some great views of the river Medway and Kingsnorth, the pretty village of Stoke gave us a convenient comfort break and we were then approaching Allhallows, the most easterly point of the ride. This was significant as the wind should have been behind us for the rest of the ride. In the 1930â€™s All Hallows was planned to be a major resort, to rival Southend, which can be seen across the Thames, but WW2 intervened and the Pilot pub and a large estate of mobile homes is all that remains of this dream. However the views from the beach were impressive as a huge container ship sailed up the estuary confirming that the river must be deep despite the tide being so far out.

We stopped for a good lunch at the Fenn Bell Inn in St Mary Hoo, where we had a group photo with the pet shark: 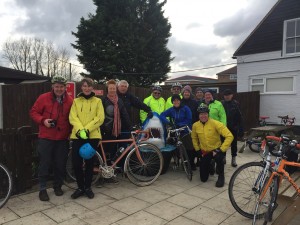 After lunch we had a couple of navigational challenges and went off piste before regaining our route and finding the delightful village of Cooling, with its fascinating church and castle. The 13th century church provided Dickens with the inspiration for the opening chapter of Great Expectations, where Pip meets the convict Magwitch, and more recently where Jools Holland married Christabel McEwan and they now live, happily ever after, in the castle. 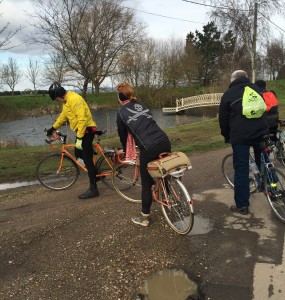 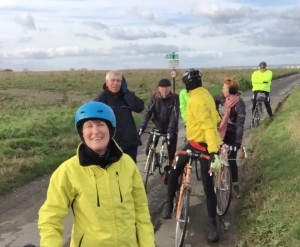 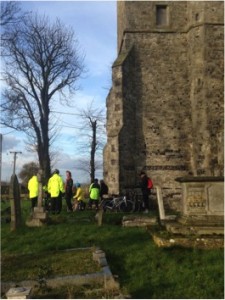 Another detour saw the group split, although we both followed basically the same route. This led us along the Thames and Medway canal and alongside the Eurostar rail track and into the industrial side of Gravesend. Although a designated cycle route, we had to negotiate flood water, glass and fires to complete our intrepid adventure into this wild and desolate corner of Kent.

If you are interested in the ride statistics here they are: