At the start of the first week of her second term as Mayor of Newham, we received the following email in response to an email sent by Simon Munk at LCC (Comments from us included in our response are set out in red italics):

Thank you for your email to Rokhsana, who is absolutely committed to reducing traffic, making our roads safer and enabling active travel. This was clearly outlined in the Newham Labour manifesto. As you say, this is absolutely in line with the Mayor’s priorities locally and Labour Party policy nationally.

Newham Cyclists recognise that the  Labour Manifesto does represent a step change towards rebalancing the Council’s approach  in favour of active travel.  We very much welcome a shift in priority and recognise the recently positive steps that have been made to promote active travel.  However given the low base from which Newham started it is important that this progress is not impeded by the conditions attached to the manifesto promises. In this context we make the following comments.

In her manifesto, the Mayor committed to:

·        Consult and work with residents to identify residential roads and areas in the borough that are affected by dangerous driving, rat-runs and traffic congestion to design schemes to make these roads safer, quitter and healthier for all our residents, including wheelchairs users and those with visual impairments and disabilities

Newham Cyclist’s ask was for Borough-wide low traffic neighbourhoods and cycle friendly connection between them. The low traffic neighbourhoods (LTNs) so far put in place, mostly in the north of the borough have proven to be successful.  It is time to go beyond simply identifying areas affected by dangerous driving and congestion.  Areas bounded by legitimate through routes (i.e. not rat runs) should be identified as potential LTNs and a rolling plan of implementing them in consultation with residents should be established.

·        Making our roads safer places by continuing to target dangerous driving and enforce parking rules across the borough, as well as launch a safety awareness campaign about electrical scooters and bikes

The borough is still plagued by illegal parking as has been recognised for some time, including by local councillors.  To “continue” enforcement at the same level does not address this problem. Enforcement has to be improved if it is to become effective in accordance with the Newham Cyclists’ ask.

·        Continue to work with residents and TfL on accessible streets, public areas, improved green spaces, public transport facilities and a 20mph speed limit with a focus on making all residential streets safer

Most 20mph areas in Newham are on lesser used residential streets.  The real safety dividend comes from an enforced 20mph on busier through roads.   A start has been made in odd spots such as  Stratford Town Centre. Newham should follow many other London boroughs and apply a 20mph on all its roads (i.e. all but the A13 and A12 trunk roads)

Schools should not have a veto on Healthy Schools Streets.

·        Install at least 1000 Electric Vehicle charging points across the borough to support the transition to cleaner vehicles, alongside 500 cycle hangars and the expansion of our cycle hire scheme with to encourage more cycle usage

The promise of 500 cycle hangers is notable amongst the active travel manifesto promises as being a concrete, unconditional promise that gives rise to true accountability.  It reflects a strong demand in a borough where where space in the flats and terraced houses that predominate is not available to store bikes.

·        Work with Transport for London to expand our cycling facilities and cycle routes as part of our plans to create a borough-wide cycle network, including good quality cycle provision for Romford Road and Barking Road

Newham Council needs to recognise that Transport for London is not necessarily a benign promoter of active travel.  For example it has been the generator of an antipathetic  bus priority scheme on the Barking Road and continues to press for more poor quality schemes. Newham Council needs to insist on schemes that promote safe active travel when pressure from TfL is to the contrary.

·        Continue to invest in our road and pavement resurfacing and repair programmes; investing at least £10 million a year. This will deliver a programme of resurfacing and patching works, pavement upgrades including those damaged by overgrown tree roots.

·        Continue with a borough-wide programme to repaint road markings and zebra crossings, alongside improvements to our streets with more trees.

There are further policies in relation to tackling climate emergency and greening the borough also in the manifesto. I hope this confirms the Mayor’s commitments in relation to your asks and she looks forward to working with residents to ensure this is all delivered.

Katie Clark I Political Assistant to the Mayor 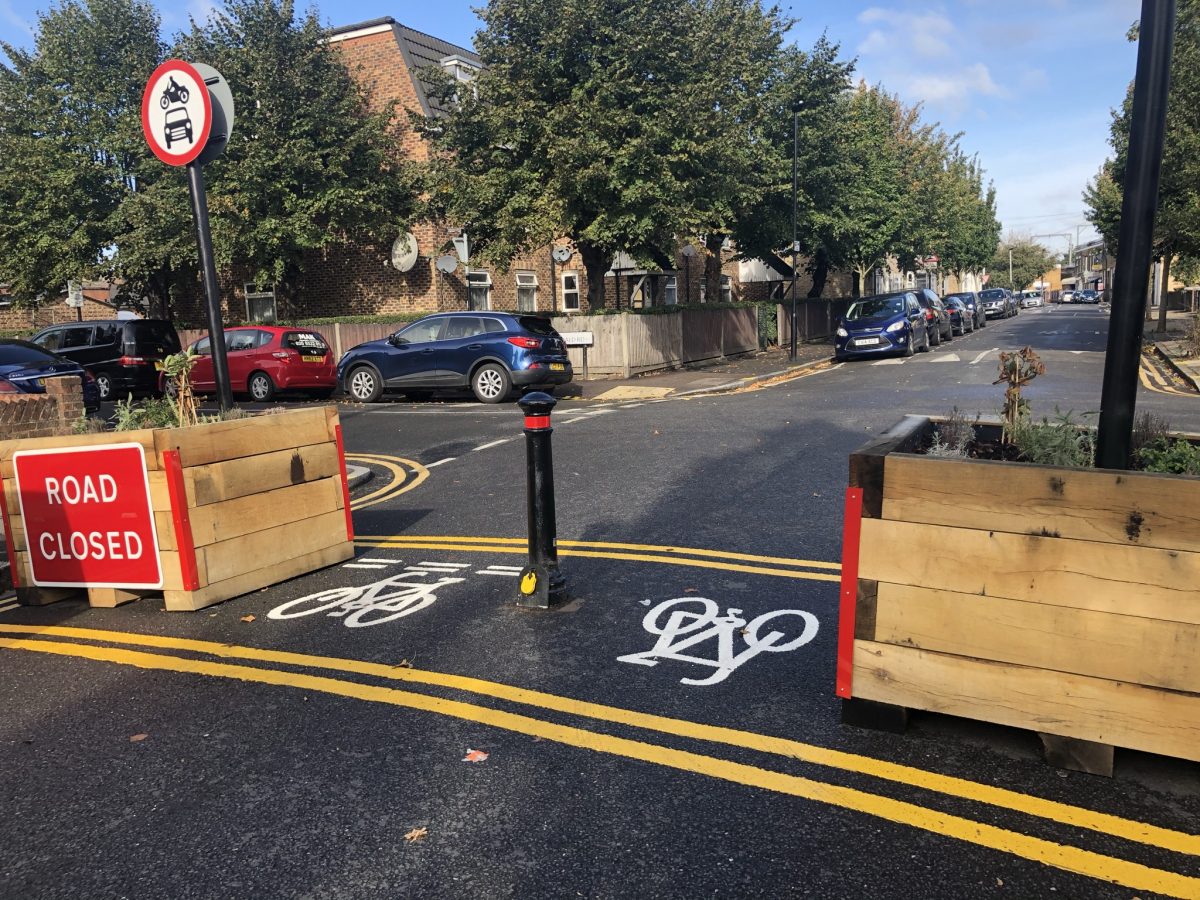 If you haven’t already done so, please take a couple of minutes to email the Mayoral candidates & ask them to support our asks (see Arnold’s post below). As yet, we haven’t had pledges from the Conservative candidate, or the Labour incumbent – despite the Labour Party manifesto covering all the asks in some form!

On Saturday we were delighted to lead our first ever Pride Ride as part of the events of Forest Gayte Pride! Less than 10 miles of easy riding, but we managed to take in 4 historic LGBT venues in Stratford & Maryland as well as the only one still existing in the borough as we passed through the Olympic Park.

Numbers were a bit lower than hoped, as less than half of those who had booked actually turned up, but everyone who joined us – most of whom hadn’t ridden with us before -had a great time and the sun shone upon us!

Most riders really embraced the spirit – wearing rainbow colours (beautifully demonstrated by Steve and Anita!) and flags decorated our rider leader and all our marshals’ bikes.

Most of our route was on quiet roads – other than a small section on Romford Road and Woodgrange Road, where we were reminded of the lack of good infrastructure for cycling! However, we really enjoyed the majority of the ride which took us through LTNs and were a delight!

Jonathan has revised our response to this for the 3rd time following new information.

LCC are revising their guidelines on rides over the next few days, so we hope to be able to run a few rides with bigger groups over the coming months. These will be relatively local and avoiding the use of public transport.

The announcement for the joint Low Traffic Neighbourhood with Waltham Forest was made yesterday. Full details are online:

We had a magical ride through London’s West End to enjoy the sparkling atmosphere. Here is a link to the photos

Sunday’s Essex Lane’s ride followed the route from Epping station north east towards Morton, Fyfield and Willingale, before going south towards Blackmore and then west to Stondon Massey.

We had lunch at the Bricklayers, before heading to Ongar then Greensted, Toot Hill and the rollercoaster back towards Epping.
The weather was amazing, warm and sunny, and the countryside still had the lush feel of summer. Leaving Epping we saw the Routemaster buses running the shuttle service to NorthWeald so we decided to make a short detour to see the spectacle which is the preserved station, vintage trains and busses recreating the transport infrastructure of the past.

There are numerous stories regarding how this came about and if you are interested you will have to wait until the next Essex lanes ride to find out.
After lunch we couldn’t resist a stop at Greensted church as we were passing and there was a demand for local honey. Unfortunately there was none but there were lots more local history stories.

The photos only show the start and finish of the ride, but can you spot the ebike?

This is always the biggest family ride of the year with many people coming from outside London to take advantage of the freecycle cycling carnival in Central London, with no traffic. It was our task to ensure that the participants were guided safely through the streets leading to the Freecycle and bring them back after the event

This year we changed the route to include the Olympic Park, Victoria Park, a short section of the regents canal and quiet way 13, from Broadway Market to Shoreditch and on to Moorgate and Bank. Families gathered, their bikes were checked, tyres pumped, emergency contact forms filled and everyone was made to feel welcome. As usual we saw some interesting vehicles, including a scooter, a child trailer and a rider with a large sound system on his back. There were a number of children on their first or longest road ride, who were asked to ride at the front to set the pace, the youngest was just four years old.

The weather was fine and the ride passed very smoothly, apart from coming across a seemingly continuous running race in Victoria Park. Our excellent team of marshals worked hard to ensure that the riders were safe, had fun and arrived at the Bank to join the thousands of people on bikes enjoying a traffic free London, perhaps this is how London will look in future.

More photos here – thanks as always to Robin Stephenson.

Many of you will have seen on Social Media that LBN have backtracked on the Browning Road Bridge experimental scheme that was due to start last week, after a protest took place by drivers who use the area.

We have written to the Mayor and the Cabinet Member for Highways and Sustainable Transport to express our concerns.