We have led two more rides for AAA’s Saturday children’s cycling club – on 5 May and 2 June.

The first was a jaunt along the Greenway (first braving a traffic jam caused by a funeral in the West Ham Cemetry) and through Three Mills Green.  Notably we got a disability bike along the Channelsea Path linking Three Mills to the Greenway.

There was  very positive feedback from the eight children participating. 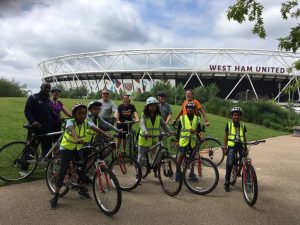 Duly inspired, and with a group of six slightly older children, our second ride ventured from the Greenway along the Lea towpath to the Olympic Park.  This gave us a chance to focus more on cycle  skills as well as taking some of the children to a part of Newham they had not been to before or had little knowledge of.

A great pleasure and success for them and us.

We are therefore trying to fit another ride in before the summer shut down.  If you might be able to help between 10.15 am and 12.45 pm on either Saturday 30 June or Saturday 7 July let me know at newham@lcc.org.uk