Our crack team of marshals was out in force to guide 70 riders (including a large contingent of children and their parents from Central Park School) from the Boleyn Statue to the London Stadium and back.   Some used dockless bikes provided by Mobikes.

Stephen Timms MP was amongst the riders as well as local councillors. 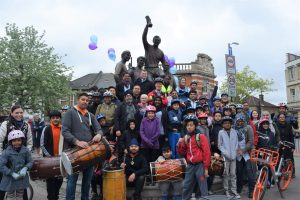 Most children also enjoyed a  session of football training from the West Ham Foundation at the Community Track. 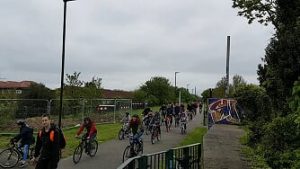 Unsolicited feedback was extremely positive.  A very successful event in partnership with the Bike from Boleyn organisation which demonstrated the value of the Greenway for getting around Newham.

Thanks also to Newham Council for providing a Dr Bike, facilitating the dockless bikes, and opening the big gates on the Greenway.