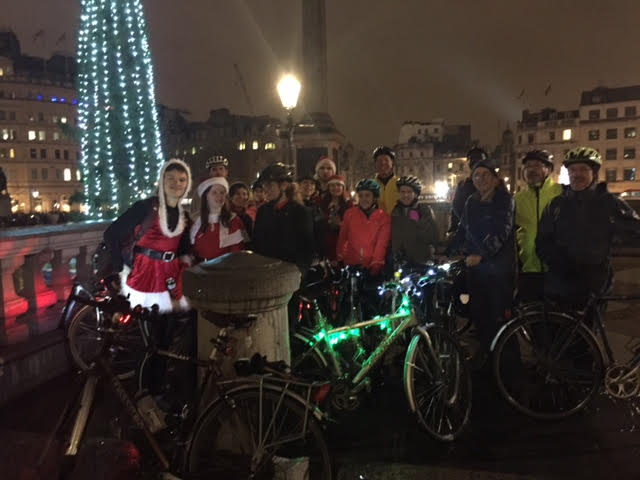 We had a good turnout for the last Newham Cyclists ride of 2016, despite the rainy weather. Taking the CS2 into to central London was a breeze and suddenly as we entered the City and St Paul’s we were surrounded by hundreds of young people dressed as Santa Claus, wasn’t he supposed to be an old, bearded man? Bemused we negotiated the West End traffic, both on the roads and pavement, well, there are not that many shopping days to go. Our aim was to see as many of the fancy street lightshows as we could. This included Oxford Street, Carnaby Street, Regent Street, New Bond Street, Piccadilly Circus, Leicester Square, and Trafalgar Square, where there appeared to be a Santa rally occurring, so we had a photos taken with a couple. 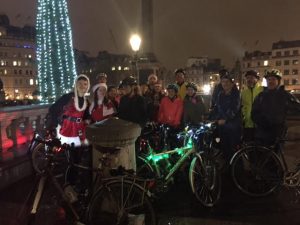 Our route then continued towards Covent Garden and Somerset House, where we descended to the Embankment to take the CS3 route home. The scorecard on this year’s lights still seems to be weighted in favour of Carnaby Street, although, on recommendation, we included Neal Street this year it was hard to reach a consensus (11/10 Bernard, 4/10 Bill). I suppose everyone has their own idea of Christmas