As usual a lot happening.

12 July saw our last scheduled Newham Ride whichÂ again took inÂ a foray south of the river to enable us to enjoy almost all the pieces on the Sculpture Line and a trip on the Cable car. Â It was thoroughly enjoyed by the dozen or so participants. Â Thanks to Steve for the photos. 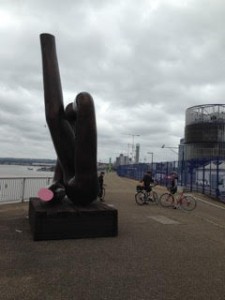 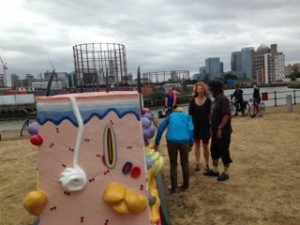 On 13 July we attended an initial stakeholder presentation for the remodelling of the Stratford Gyratory.

On the 16 July we were represented at the LCC Local Groups meeting Â which was concerned with the updating of its governance arrangements. Â There will likely be be a small knock Â on effect requiring some tinkering with our (by now venerably ancient) local constitution.

At the same timeÂ a Crossrail stakeholders consultation meeting was held by Newham Council. Â The point was made that at Manor Park and Maryland there was room for cycle lanes that could be continuous with the other proposed schemes for Stratford Gyrator y and the Quietway.

On 1 august we led our most successful yet feeder ride from Stratford to the central Lhondon Freeride. Â Over 90 cyclists were delivered safe and dry to Fenchurch St, by a large team of Newham Cyclists.

Our July monthly meeting took place on 3 August. Â  We were pleased to have the opportunity to cycle the proposed Newham section of theÂ Victoria Park to Hainault Quietway withÂ Â Forest Gate North Councillor Â Seyi Akiwowo. Â We showed her our proposed more direct alignment (avoiding a potential conflict with a popular playground) Â and demonstrate how crucial it is to get high qualityÂ crossings of theÂ main roads.

Newham Cyclists and a number of us as individuals have already put inÂ Â responses to the Council’s consultation on this Quietway, but the details of the route are still very much open following a stormy meeting the Council held with the residents of Capel Rd and its immediate neighbourhood. Â Interestingly the traffic count for Capel Rd came out lower than expected.

Over refreshment the monthly meeting further discussed the Quietway, plus the following matters: