We will (weather permitting) squeeze in a last evening ride.  This time based around the Queen Elizabeth Olympic Park.

We will meet at Woodgrange Market, the corner of Woodgrange and Sebert Roads in Forest Gate, and depart at 7.00pm (to catch as much light as as possible).  We will go to the QEOP via Quietway 6.  If you would like to join the ride at an intermediate point along the Quietway or in the QEOP please let me know and a specific arrangement can be made.

After a short ride we will adjourn to the White Post in Hackney Wick for a short update and discussion on cycling in Newham.

This is a leisurely journey around the edges of Newham taking in the banks of three rivers (the Roding , the Thames and the Lea) and including a number of parks, opens spaces and sites of historic interest. It is mostly off road on paths or on quiet roads and is suitable for those who have started or are returning to cycling and wish to regain confidence. There are options to explore areas such as the Beckton Creekside and Bow nature reserves.

Please do not turn up to this event if you are displaying symptoms of Covid-19. The safety of our volunteers and participants is key to us.

On Saturday we were delighted to lead our first ever Pride Ride as part of the events of Forest Gayte Pride! Less than 10 miles of easy riding, but we managed to take in 4 historic LGBT venues in Stratford & Maryland as well as the only one still existing in the borough as we passed through the Olympic Park.

Numbers were a bit lower than hoped, as less than half of those who had booked actually turned up, but everyone who joined us – most of whom hadn’t ridden with us before -had a great time and the sun shone upon us!

Most riders really embraced the spirit – wearing rainbow colours (beautifully demonstrated by Steve and Anita!) and flags decorated our rider leader and all our marshals’ bikes.

Most of our route was on quiet roads – other than a small section on Romford Road and Woodgrange Road, where we were reminded of the lack of good infrastructure for cycling! However, we really enjoyed the majority of the ride which took us through LTNs and were a delight!

Yes,  we are finally going to meet with an evening ride to look at the Royal Docks Corridor and to retreat to a hostelry or cafe with outside seating – probably the Red Lion in Plaistow.

Meet 7.00pm at Terry Spinks Place (public realm opposite Canning Town Station and near the A13 Flyover)

Our annual leisurely trip to the Rainham Marsh RSPB Bird Sanctuary and on to Upminster.  Between 20 and 25 miles predominantly on cycle tracks and paths.  Refreshments at RSPB where the cafe is open and there is outside seating. Suitable for all bikes.

We leave from the View Tube at 10.00 am – note early start time – and end at Upminster Station to catch the C2C train to either Barking or West Ham.  The District line is not running on 18 July.

Please do not book unless you intend to attend.

A relaxed and socially distanced 17km/10 mile circular ride exploring the Poplar area of Tower Hamlets where the Call the Midwife stories originate from. We will stop for coffee at The Ledger Building/Museum of Docklands then continue to Pepper Street/Cross Harbour where we will have a lunch stop. Lunch can be bought from one of the cafes there, the Tesco Supermarket or Asda Isle of Dogs, there is also seating available for those who bring their own food.

The ride is mainly on quiet streets, cycle and pedestrian only paths and
cycle lanes. There is a small section along a major road which is a cycle
route and small sections of canal side cycling. There are also a number of speed reduction gates, some sharp turns, kerb steps and short sections where we need to dismount and walk.

Places are limited and booking is essential:

Bike from Boleyn rides are intended to maintain the link between Upton Park and the London Stadium . This ride celebrates the end of a successful season for West Ham.

It is a socially distanced, leisurely, mostly off road or quiet road tour of sites connected with West Ham with a cafe stop opposite the London Stadium. It will end shortly before kick off . We start and finish at the 1966 statue .  Approximately 10 miles.

This ride is being put on by Newham Cyclists which is part of the London Cycling Campaign in conjunction with GoParks London, a campaign to encourage Londoners to explore their parks and engage with community groups involved with parks.

It is a series of connected rides (all easy) starting, at the View Tube, which give an option of distances and time spent approximately 3 miles, 13 miles or 23 miles. Option 1 is the Queen Elizabeth Olympic Park suitable for all ages. Option 2 takes in the parks of “urban Newham” and involves riding on some (mostly quiet) roads) and Option 3 also takes in the Parks of the Thames side/Royal Docks and Lea Valley.

Places must be pre-booked on:

Please e-mail newham@lcc.org.uk by close on 30 April to indicate which ride option you would like to take.

All rides have the facility for stops for information and refreshment.

Those wanting to end after options1 or 2 can return to the View Tube off road via the Newham Greenway.

Arnold will lead a ride to this cycle fun day, organised by Bexley Cyclists, using a mostly off road route (including the Emirates Cable Car – so please bring Oyster or contactless).

There will be no return led ride. 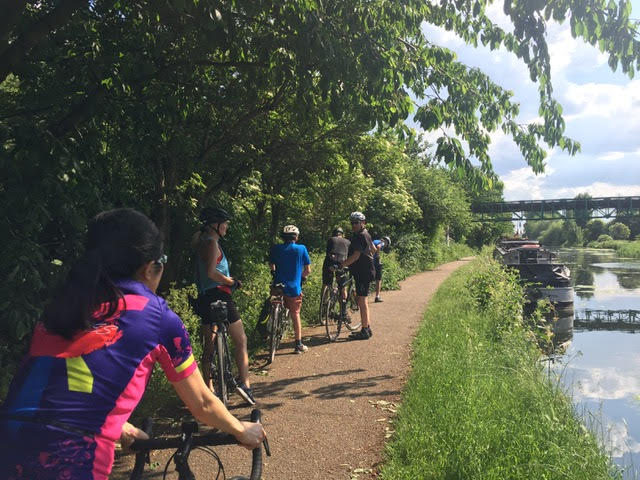 This has become a popular ride.  Well, cakes and bikes – what’s not to like?!

Arrive at St Thomas’ at approximately 1:30pm where there’s a nice spot for picnic or the Horseshoe pub next door for lunch. Cakes from 2.30pm
Mixture of off and on road riding with some steep hills. (Steve did the recce on his single speed and had to get off and push sometimes!)

It’s a 40 mile round trip, mostly off road, with an option to take a train from Waltham Cross to Liverpool St, for those that would prefer not to ride back (or have eaten too much cake…)