May 23 saw us start out from Forest Gate to look at progress on Waltham Forest’s mini-Holland project.  It was a real revelation.

We met Paul Gasson at Leyton for his expert guidance.   There we saw the first manifestation – the Brompton hire box opposite the secure cycle parting at Leyton :

He explained that most of the project had now been designed and consultation was in play.  About one-quarter had been put in place.  TfL had provided £37m but the Council had found a further £17m much of it from developers (in contrast Newham Council seems to have a self-denying ordinance against seeking money for cycle infrastructure from developers); and had backed this by strong political impetus and some expert engineers/designers who were keen to get the infrastructure in place and prepared to change it if it did not work.

A key element of the project is a Superhighway along the length of Lea Bridge Road from the river to the edge of the Epping Forest.  A small part is in place near the Ice Skating centre and foreshadows something of high quality which will take about a year to put into place.

Here we also got our first glimpse of the new Lea Bridge station and its recently installed secure cycle parking:

Another key element of the project is “villagisation” i.e. creating four areas without through traffic.  This is key to promoting the project as being as much a public realm benefit as a cycling benefit.  The first such area put in place was Walthamstow village; but we passed through first the recently installed point closures in Blackhorse “village”.  The “villages” are to be complemented by safe routes across heavily trafficked routes along their borders, such as this tiger crossing (of the sort we should see along our Quietway 6): 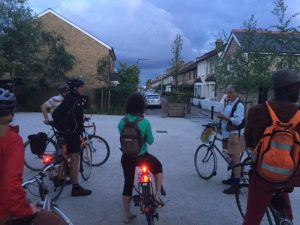 We ended up at Walthamstow Village, where  point closures had been used to create mini squares:

Time prevented us seeing Walthamstow town centre (for which a cycle hub is planned) and routes to Chingford.  But what we saw was impressive and a testimony of what can be done with some political will.

Thanks to Bill for the photos